A New Way to Predict Drought Before It Hits

The team of scientists from USDA-ARS, NOAA, the University of Maryland, and the National Drought Mitigation Center, experimented with an integration of measurements of land-surface temperature with albedo, vegetation, and land cover info. The new drought indicator is called the ESI (Evaporative Stress Index.) It describes temporal anomalies in evapotranspiration which helps to detect the drought from two to four weeks earlier than drought indicators used priorly. What's the catch?

As now, the drought indicators use precipitation, streamflow, temperature, groundwater, reservoir levels, snowpack and soil moisture as variables. The ESI adds the space-based information to evaluate the conditions of the ground to explain patterns of water availability and moisture stress across large areas. In other words, it tells how crops respond to irrigation. If there is not enough water, the actual rate falls below the potential rate. Otherwise, it's high. Why is it so crucial?

There are different types of droughts. What we use to see from the drought monitoring, are the slow-developing droughts. When the ground gets hit by this phenomenon, its top layer is left bone dry. The moisture is sucked out of the soil due to extreme heat and drying winds. The flash drought damages crops in a matter of weeks before you can see any visible signs. 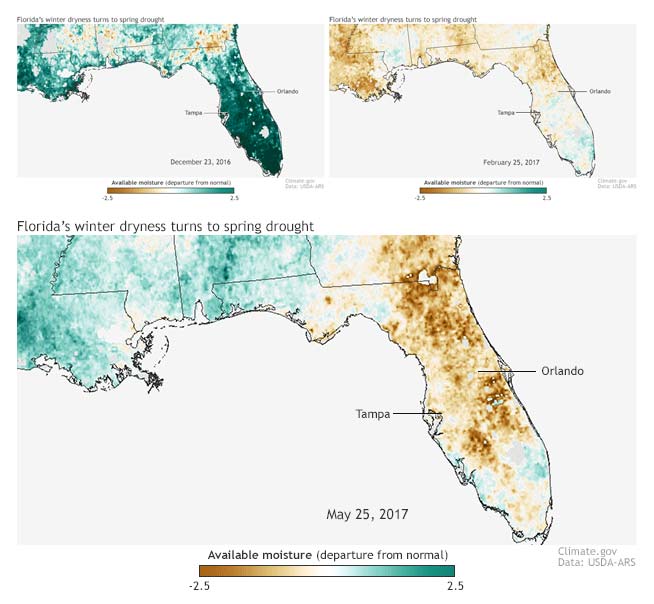 The discovery mechanism uses thermal infrared satellite measurements to find places where the surface is hotter than usual due to the dried-out soil.

Predicting the flash droughts is just a first step in advancing the drought monitoring system. According to Hain, the team developed a new method to use MODIS (Moderate Resolution Imaging Spectroradiometer) and VIIRS data (land surface and ice temperature) to produce a global ESI product from a single sensor.

From 2016, the ESI has been adopted by NOAA's online GOES Evapotranspiration and Drought Product System as supplementary information to the agriculture and water resource communities. Texas Water Board Agency turns to the ESI for seeing the early indicators of droughts.

Studies made at the University of Oklahoma have shown that the new system is helpful to state officials to predict the time and location of wildfires.

You can see from the image how the ESI changes across the Southeast U.S. from 2016 to 2017. The brown areas show the worsening drought conditions across Northern and Central Florida. The falling soil moisture rate indicates the onset of flash droughts. You don't need to know anything about the amount of rainfall to detect vegetation stress. While regular drought monitoring that relies on rainfall and temperature can fail, the detection of flash droughts gives more stable data.

For farmers and ranchers, the ESI is crucial as it gives them an idea how intense the drought can be long before it happens. The system shows drought forecasts without 2 to 3 miles. Jason Otkin, an assistant scientist at the University of Wisconsin's Cooperative Institute for Meteorological Satellite Studies, believes this new method is especially useful for cattle ranchers. Cattle are more mobile than crops. When the potential of a drought is high, ranchers have time to get ready. It also helps farmers identify their risks to make correct decisions.

Despite the drought officially ended by Gov. Jerry Brown, Mediterranean climate in major parts of California remains the same. Water demands in warm, hot, dry summers and mild, moderately wet winters always exceed the water resources. A five-year drought raised concerns. It costs the state economy billions of dollars. It stressed forests and left more than 100 million dead trees behind. But the effects are far more deadly than anyone could imagine.

California doesn't look green anymore. In the historic state of drought, Californian lawns are now on the edge of extinction. Homeowners and communities are continuously looking for alternatives and the artificial grass looks more and more attractive.